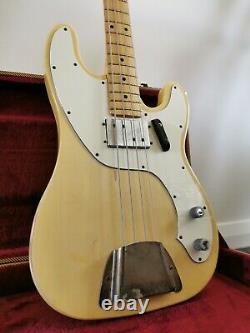 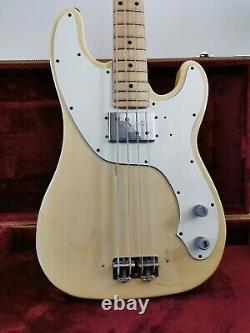 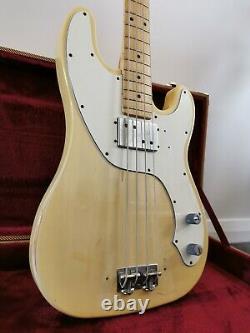 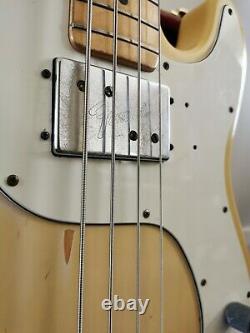 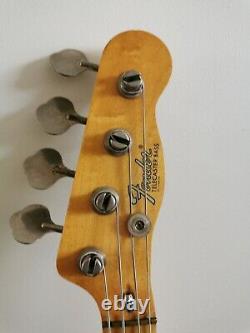 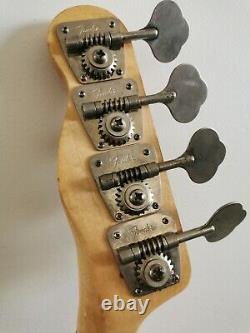 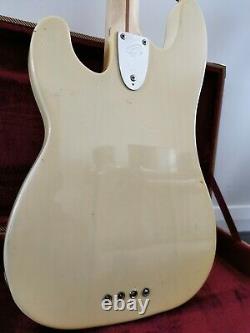 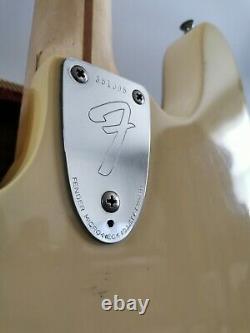 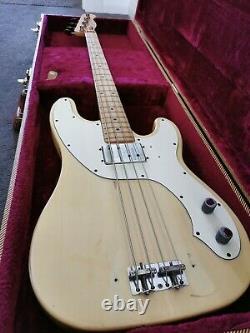 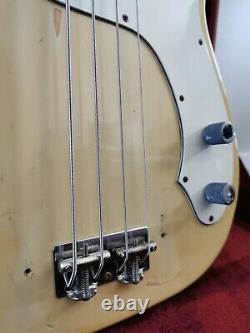 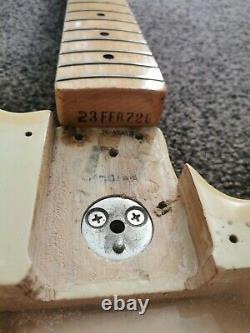 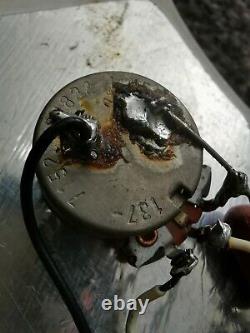 This'72 Telecaster Bass was the first year to feature the humbucker. The vintage blonde with an ash body is a rare find in this CBS era and the humbucker gives it that extra power over the previous model. The bass has that worn-in comfortable feel only a vintage instrument can provide. The body and neck finish are original. What's known to be non-original? 1 String Ferrule on the back of the body. There are various imperfections due to being a 49-Year-Old instrument, please see the pictures. Please be aware of any import restrictions and costs in your country as this is your responsibility. 1968s Telecaster Bass occupies a special place in Fender history, if for no other reason than that it was the companys first-ever reissue instrument. Many years later, in the 1980s, the modern Fender corporation would start building the first of the great many reissue guitars and basses that now comprise a large and popular portion of the companys stable of instruments. But such an idea was highly unusual at the CBS-era Fender in the late 1960s, when designers first decided to look backward rather than forward for a new bass guitar design. Thus the arrival of the interestingly named Telecaster Bass. Basically a reissue of the original version of the , there was really very little about it that had anything to do with the Telecaster guitar. True, it had the distinctive headstock shape of the Telecaster, but that shape was also a feature of the original Precision Bass headstock. The Telecaster Bass owed its existence to the fact that its true direct ancestor, , was redesigned not once but twice within several years of its 1951 debut; first in 1954 and again even more dramatically in 1957. So substantial were the changes, in fact, that the Precision Bass of 1957 onward bore little resemblance to its 1951 predecessor. It was this long-discarded design that of the original 51 Precision that was re-introduced in May 1968 as Fenders newest bass.

The Telecaster Bass also had a two-piece maple cap neck with no skunk stripe, although some models built later in 1968 did have the one-piece maple neck typical of the first Precision basses. Some early models had the paddle-shaped Fender-made tuners found on the 1966 Jazz Bass. This first Telecaster Bass version had three different headstock decals.

The earliest was a regular silver Telecaster guitar logo with the word bass added underneath; only prototypes are known to have this decal. The second decal was the larger black Telecaster Bass logo, with Bass in the same script style as Fender.

The third and most common decal had the silver Fender script with the words Telecaster Bass in a sans-serif font underneath. The 1968 Telecaster Bass also bore the unusual distinction of being briefly issued with Fenders infamous pink paisley and blue floral finishes.

These were achieved by applying paisley and floral wallpaper to the top and back, with the sides shaded using a sunburst technique to match the paper and a thick clear coat covering the entire instrument. The original Telecaster Bass model lasted until 1972, at which point substantial modifications were introduced. These resulted in what was essentially a new version of the instrument. The item "1972 Fender Telecaster Bass with Maple Fretboard 70s Vintage Blonde humbucker" is in sale since Sunday, March 14, 2021.

This item is in the category "Musical Instruments\Guitars & Basses\Bass Guitars". The seller is "jhguitarstasmania" and is located in Deloraine, TAS.